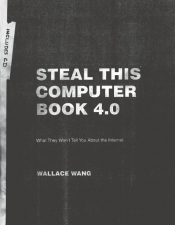 If you thought hacking was just about mischief-makers hunched over computers in the basement, think again. As seasoned author Wallace Wang explains, hacking can also mean questioning the status quo, looking for your own truths and never accepting at face value anything authorities say or do.

The completely revised fourth edition of this offbeat, non-technical book examines what hackers do, how they do it, and how you can protect yourself. Written in the same informative, irreverent, and entertaining style that made the first three editions hugely successful, Steal This Computer Book 4.0 will expand your mind and raise your eyebrows. New chapters discuss the hacker mentality, social engineering and lock picking, exploiting P2P file-sharing networks, and how people manipulate search engines and pop-up ads to obtain and use personal information. Wang also takes issue with the media for “hacking” the news and presenting the public with self-serving stories of questionable accuracy. Inside, you’ll discover:

If you’ve ever logged onto a website, conducted an online transaction, sent or received email, used a networked computer or even watched the evening news, you may have already been tricked, tracked, hacked, and manipulated. As the saying goes, just because you’re paranoid doesn’t mean they aren’t after you. And, as Wallace Wang reveals, they probably are.

Wallace Wang is the author of several best-selling computer books including of the Steal This Computer Book series, Steal This File Sharing Book, The Book of Nero 6, and Visual Basic 2005 Express: Now Playing (all No Starch Press). He is also a successful standup comic who has appeared on A&E’s "Evening at the Improv" and appears regularly at the Riviera Comedy Club in Las Vegas.

Part 3: The Internet Hackers
Chapter 7: Where the Hackers Are
Chapter 8: Stalking a Computer
Chapter 9: Cracking Passwords
Chapter 10: Digging Into a Computer with Rootkits
Chapter 11: Censoring Information
Chapter 12: The Filesharing Networks

Part 6: Protecting Your Computer and Yourself
Chapter 21: Computing on a Shoestring: Getting Stuff for (Almost) Free
Chapter 22: Computer Forensics: The Art of Deleting and Retrieving Data
Chapter 23: Locking Down Your Computer

"Since Steal This Computer Book 4.0 hit my desk, a strange thing happened: Almost every person who saw it immediately asked to borrow it. This wasn't just the other office geeks, but some downright technophobes, as well . . . There are good reasons for all the interest."
—Security Management, September 2006 (Read more)

Steal This Computer Book "demonstrates that you can write about computer security in an engaging manner . . . it is as entertaining as it is informative."
—Greater Cleveland PC Users Group, October 20, 2006 (Read more)

"A lot of information is revealed in the Wang book that could be useful for hackers."
—Cybercriminology727 blog, October 6, 2006 (Read more)

"This book has some of the best information about protecting yourself, your family and your computer from illegal or malicious acts perpetrated electronically. It also contains very thoughtful and insightful paragraphs about the use of computers by individuals, groups, corporations and nations. And it is almost as compelling as a good novel."
—Kickstart News, September 2006 (Read more)

"Highly readable and highly informative. It won't turn you into a hacker. But it will prepare you against being attacked by one and will entertain and delight you along the way."
—IT Wales, August 23, 2006 (Read more)

"A technology classic that is as entertaining and irreverent as it is informative . . . What makes this book the most gripping is . . . the astute philosophical, cultural and historic perspectives that Wang's commentaries provide."
—MacDirectory, Summer/Fall 2006 (Read more)

"If you've used the computer, you need to know about common tricks and traps, and the latest edition covers them all."
—Midwest Book Review, July 2006 (Read more)

"A terrific guide . . . made enjoyable by the sense that you're seeing how the bad guys operate. But beyond this excitement, the book has immediate value."
—SD Times, July 1, 2006 (Read more)

"Guides us nicely through the computer and internet underworld and as such it's a fairly good guide to a lot of the possible things that can go wrong."
—Mstation, June 30, 2006 (Read more)

"I would recommend it for anyone that wants an entertaining overview of computers and criminals."
—WindowsSecurity.com, June 26, 2006 (Read more)

"It's similar to reading about the seamy underbelly of your local city . . . you know it's there, you don't condone it, but you have a hard time averting your eyes when you drive by."
—Duffbert's Random Musings, June 3, 2006 (Read more)

"With security an everyday concern, No Starch Press has released an updated version of a useful book."
—Minnesota Technology Magazine, May 2006 (Read more)

"Although this book is not for the non-technical small business owner/manager, it could be VERY useful for the IT consultant serving the needs of small businesses and who needs a better understanding of security and the world of hackers."
—Small Business News, May 21, 2006 (Read more)