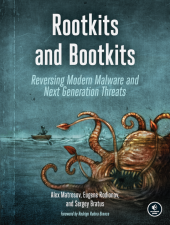 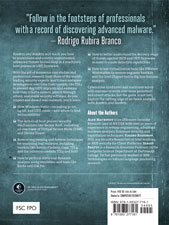 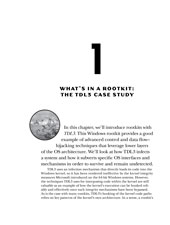 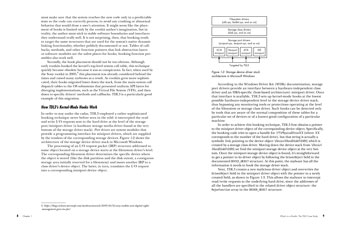 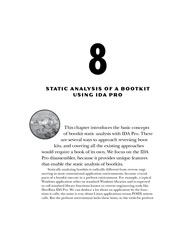 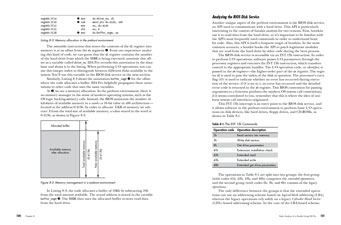 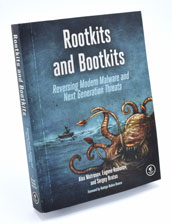 Rootkits and Bootkits will teach you how to understand and counter sophisticated, advanced threats buried deep in a machine’s boot process or UEFI firmware.

With the aid of numerous case studies and professional research from three of the world’s leading security experts, you’ll trace malware development over time from rootkits like TDL3 to present-day UEFI implants and examine how they infect a system, persist through reboot, and evade security software. As you inspect and dissect real malware, you’ll learn:

Cybercrime syndicates and malicious actors will continue to write ever more persistent and covert attacks, but the game is not lost. Explore the cutting edge of malware analysis with Rootkits and Bootkits.

Alex Matrosov is a leading offensive security researcher at NVIDIA. He has more than two decades of experience with reverse engineering, advanced malware analysis, firmware security, and exploitation techniques. Before joining NVIDIA, Alex served as Principal Security Researcher at Intel Security Center of Excellence (SeCoE), and spent more than six years in the Intel Advanced Threat Research team, and was Senior Security Researcher at ESET. Alex has authored and co-authored numerous research papers, and is a frequent speaker at security conferences, including REcon, ZeroNights, Black Hat, DEFCON, and others. Also, he is awarded by Hex-Rays for open-source plugin HexRaysCodeXplorer which is developed and supported since 2013 by REhint’s team.

Eugene Rodionov, PhD, is a Security Researcher at Intel working in the domain of BIOS security for Client Platforms. Before that, Rodionov ran internal research projects and performed in-depth analysis of complex threats at ESET. His fields of interest include firmware security, kernel-mode programming, anti-rootkit technologies, and reverse engineering. Rodionov has spoken at security conferences such as Black Hat, REcon, ZeroNights, and CARO, and has co-authored numerous research papers.

Sergey Bratus is a Research Associate Professor in the Computer Science Department at Dartmouth College. He has previously worked at BBN Technologies on Natural Language Processing research. Bratus is interested in all aspects of Unix security, in particular in Linux kernel security, and detection and reverse engineering of Linux malware.

“This deep reference, jam-packed with code and technical information, will support an engineer or system administrator tasked with putting these vulnerabilities in their place.”
—Ben Rothke, Security Management

“Alex Matrosov, Eugene Rodionov, and Sergey Bratus are experts in their field that have delivered a solid hands-on technical book. While enthralled with the stories from the trenches, I got flashbacks of my days of analyzing rootkits on SunOS and Solaris workstations about 20 years ago. It was a fun book to read.”
—Sven Dietrich, Cipher: the newsletter of the IEEE Computer Society's Technical Committee on Security and Privacy

"I enjoyed reading the book and learning about the malware, even if it was not particularly relevant to me, as 'I don’t do Windows.' Still, there’s more than enough here that’s relevant to Linux users, as malware writers are now turning their attention to Linux servers."
—Rik Farrow, USENIX ;login: magazine

"[A] seminal book that explains how to understand and counter sophisticated, advanced threats buried deep in a machine’s boot process or UEFI firmware."
—Business Wire