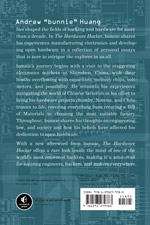 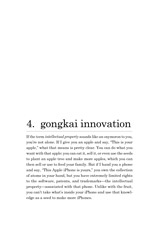 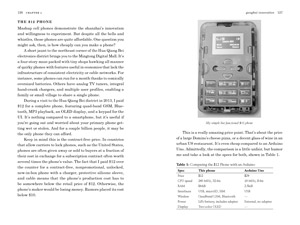 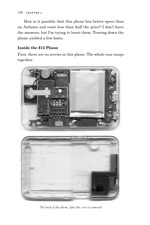 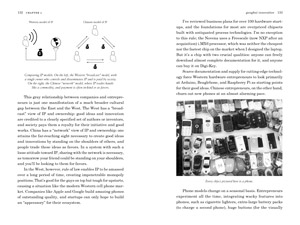 “Hardware, says Bunnie Huang, is a world without secrets: if you go deep enough, even the most important key is expressed in silicon or fuses. His is a world without mysteries, only unexplored spaces. This is a look inside a mind without peer.”
—Edward Snowden

“A tour-de-force that combines the many genius careers of one of the world’s great hacker-communicators: practical, theoretical, philosophical and often mind-blowing. Huang isn’t just explaining how to make things, he’s peeling back the roofs of factories, the surfaces of microcontrollers, and even the human genome. The secret workings of our world are laid bare and the levers by which they may be moved are put in the reader’s hands.”
—Cory Doctorow, Author of Little Brother and technology activist

“bunnie lives in the world of hardware where the solder meets the PCB. He has more practical experience and is a better teacher of how the ecosystem of hardware works than any other person I’ve ever met, and I know a lot of people in this space. He has rendered this experience and expertise into an amazing book—a hacker’s-point-of-view-bible to anyone trying to work in or understand and work in the emerging and evolving world of hardware.”
—Joi Ito, Director, MIT Media Lab

For over a decade, Andrew "bunnie" Huang, one of the world's most esteemed hackers, has shaped the fields of hacking and hardware, from his cult-classic book Hacking the Xbox to the open-source laptop Novena and his mentorship of various hardware startups and developers. In The Hardware Hacker, Huang shares his experiences in manufacturing and open hardware, creating an illuminating and compelling career retrospective.

Huang’s journey starts with his first visit to the staggering electronics markets in Shenzhen, with booths overflowing with capacitors, memory chips, voltmeters, and possibility. He shares how he navigated the overwhelming world of Chinese factories to bring chumby, Novena, and Chibitronics to life, covering everything from creating a Bill of Materials to choosing the factory to best fit his needs.

Through this collection of personal essays and interviews on topics ranging from the legality of reverse engineering to a comparison of intellectual property practices between China and the United States, bunnie weaves engineering, law, and society into the tapestry of open hardware.

With highly detailed passages on the ins and outs of manufacturing and a comprehensive take on the issues associated with open source hardware, The Hardware Hacker is an invaluable resource for aspiring hackers and makers.

Andrew "bunnie" Huang is a hacker, maker, and open hardware activist. He holds a Ph.D in Electrical Engineering from MIT, is the author of Hacking the Xbox (No Starch Press) and The Essential Guide to Electronics in Shenzhen, and has served as a technical advisor for various hardware startups and MAKE Magazine.

PART 3: What Open Hardware Means to Me
Chapter 6: The Story of Chumby
Chapter 7: Novena: Building My Own Laptop
Chapter 8: Chibitronics: Creating Circuit Stickers

“Bunnie is the ultimate tour guide of hardware hacking as it stands today, with an eye towards the sublime art of how things are /really/ made. The Hardware Hacker will take you on a journey through the factories of the world, covering both technical & ethical implications of the ‘stuff’ we manufacture and buy.”
—Limor “ladyada” Fried, Founder & Engineer, Adafruit Industries

“Superb. Provides insights that could make the difference between success and failure”
—Ben Rothke, RSA Conference

MIT Technology Review spoke with Andrew ‘bunnie’ Huang about what you need to know about manufacturing in China. Read an edited Q&A here.

“Fascinating, insightful, and practical. Curious how the devices in our daily lives come into being? Want to manufacture your own project? In this well-written book, Bunnie describes the ins and outs of manufacturing process in China. A very entertaining and informative read.”
—Mitch Altman, Inventor of TV-B-Gone

“In The Hardware Hacker, Huang reveals the common ethic behind everything he does: a celebration of ingenuity, problem-solving, craft, technique and curiosity. Nothing less than a masterclass in modern manufacturing.”
—Boing Boing

“The Hardware Hacker will tell you how to succeed at whatever endeavor brought you to Shenzhen in the first place. It is, at its core, the primer for understanding the culture of making something in China, how to build thousands of things, and why Open Hardware works.”
—Hackaday

“A captivating read that epitomizes the hacker ethos. Bunnie has an unmatched ability to immerse himself in a technology and share his experiences in a way that the rest of the world can understand.”
—Joe Grand aka Kingpin, hardware hacker and member of L0pht Heavy Industries

“I’d highly recommend this book for anyone interested in hacking, or even just casually interested in cyberpunk science fiction!”
—MAKE

“Fantastic! Requisite reading for anyone in the business. I know it's going to be good.”
—EEV Blog

“Huang's new book, The Hardware Hacker acts as both a career retrospective for Huang, as well as a guide to how the ‘stuff’ we buy is made.”
—NBC News

Bunnie was interviewed on The AMP Hour with Chris Gammell and Dave Jones!

“I hope you will enjoy reading this book as much as I did. Andrew 'bunnie' Huang is a master in his field and is not shy to share a view of his world.”
—Sven Dietrich, IEEE Cipher

“An inside look at Chinese electronic component markets, manufacturing, fake parts, and the hacker mentality. The Hardware Hacker will open your eyes.”
—EE Times

Andrew “bunnie” Huang spoke to Inverse about the SEG Electronics Market in Shenzhen, becoming dependent on our devices, and his work with Edward Snowden.

Tune in to Bunnie's interview on here.

“The Hardware Hacker is a joy to read, and it’s hard to imagine anyone from any field not being swept along by Huang’s knowledgeable, effervescent writing and sincere enthusiasm. Any reader will come away with a deeper, richer understanding that makes its worth impossible to overstate.”
—IT Security

“Breaks new ground...I can't think of a book like it.”
—I Programmer

“The Hardware Hacker is Huang’s crash course in a side of computing that’s seldom provided the light it deserves. This is a great book if you want a deeper look into how all those devices you rely on got from patents to your pocket.”
—Strategic Finance Magazine

“The Hardware Hacker makes you rethink the items we buy, where they come from and how they end up the way they are, and the story of the many people who make them. Give this book to an engineer or a hardware hacker and I swear you’ll not hear a peep out of them until they reach the final page.”
—Meltwater's Raspberry Pi Hardware