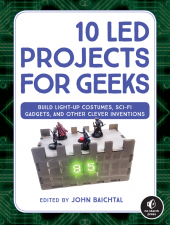 10 LED Projects for Geeks is a collection of interactive and customizable projects that all have the humble LED in common, but don’t write them off as basic! You’ll learn how to make challenging and imaginative gadgets like a magic wand that controls lights using hand gestures, a pen-sized controller for music synthesizers, a light strip that dances to the beat of music, and even an LED sash that flashes scrolling text you send from your phone.

Every project includes photos, step-by-step directions, colorful circuit diagrams, and the complete code to bring the project to life. As you work your way through the book, you’ll pick up adaptable skills that will take your making abilities to the next level. You’ll learn how to:

If you want to experiment with LEDs and circuits, learn some new skills, and make cool things along the way, 10 LED Projects for Geeks is your first step.

John Baichtal has written or edited over a dozen books, including the award-winning Cult of Lego (2011 No Starch Press), LEGO hacker bible Make: LEGO and Arduino Projects (2012 Maker Media) with Adam Wolf and Matthew Beckler, as well as Robot Builder (Que 2013), and Hacking Your LEGO Mindstorms EV3 Kit (Que 2015). He’s hard at work on his latest project, a compilation of Minecraft projects for Maker Media. John lives in Minneapolis with his wife and three children.

Contributors to 10 LED Projects for Geeks:

Kaas Baichtal became interested in computers and electronics around age 12, taking every available electronics class. As a technician Kaas worked mostly in the entertainment industry, doing equipment repairs and travelling system installs for theatrical dimmer manufacturers AVAB America and Electronic Theatre Controls (ETC) as well as multimedia integrator BBI Engineering. Kaas has run her own servers at home since 1998 and specializes in writing custom code to solve real life problems.

Matthew Beckler is a computer engineer who lives in Minneapolis with his wife and two cats. His day job usually consists of writing firmware for fancy microcontrollers, and he is a co-founder and engineer of a fun side-hustle called Wayne and Layne, where he and Adam Wolf design and sell electronic kits and help create interactive museum and art exhibits.

Kristina Durivage is an independent software developer by day and a hardware hacker by night—specializing in data visualization and making the world a brighter place with LEDs. Her work is collected at portfolio.gelicia.com and her opinions and cat pictures can be found on Twitter, @gelicia.

Lenore M. Edman is a co-founder of Evil Mad Scientist Laboratories, a family run company that designs, produces, and sells hobby electronics kits, drawing machines, and retrotechnological objects. She writes for the accompanying project blog on the topics of electronics, crafts, cooking, science, robotics, and anything else that catches her fancy. Many of the blog’s projects have been featured at science and art museums and in Make, Wired, and Popular Science magazines. She holds a B.A. in Interdisciplinary Studies; English and Greek.

Mike Hord has been working at SparkFun Electronics designing products and projects for makers for six years. His making skills run the gamut from metalworking, woodworking, and 3d printing to coding and circuit design. When not creating his next Big Hack, he's raising two small children to question the veracity of everything except the need for toothbrushing.

James Floyd Kelly is a full-time technology writer in Atlanta, Georgia. He has written over 25 books on a mix of topics that includes Open Source software, LEGO Robotics, basic electronics, Arduino programming, and more. He and his wife have two young boys who are showing the early signs of Maker-ness.

Michael Krumpus has a master's degree in computer science and 25 years of experience as a software engineer. He discovered a passion for electronics design later in life and formed a small electronics company, nootropic design, where he designs and manufactures innovative electronics for hobbyists, designers, educators and industry. Michael is based in Minneapolis, MN.

Windell H. Oskay is the co-founder of Evil Mad Scientist Laboratories, a Silicon Valley company that has designed and produced specialized electronics and robotics kits since 2007. Evil Mad Scientist Laboratories also runs a popular DIY project blog, and many of its projects have been featured at science and art museums and in Make, Wired, and Popular Science magazines. Windell was also a founding board member of OSHWA, the Open Source Hardware Association. Previously, Windell has worked as a hardware design engineer at Stanford Research Systems and as a research physicist in the Time and Frequency Division of the National Institute of Standards and Technology. He holds a B.A. in Physics and Mathematics from Lake Forest College and a Ph.D. in Physics from the University of Texas at Austin.

Adam Wolf is a cofounder of and engineer at Wayne and Layne, where he designs DIY electronics kits and interactive exhibits. He also does computer engineering and embedded systems work at an engineering design services firm in Minneapolis, MN. When he isn't making things blink or helping computers talk to each other, he's spending time with his wife and sons.

View the detailed Table of Contents