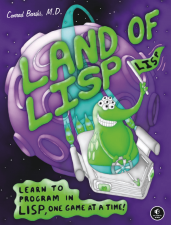 Lisp has been hailed as the world’s most powerful programming language, but its cryptic syntax and academic reputation can be enough to scare off even experienced programmers. Those dark days are finally over—Land of Lisp brings the power of functional programming to the people!

With his brilliantly quirky comics and out-of-this-world games, longtime Lisper Conrad Barski teaches you the mysteries of Common Lisp. You’ll start with the basics, like list manipulation, I/O, and recursion, then move on to more complex topics like macros, higher order programming, and domain-specific languages. Then, when your brain overheats, you can kick back with an action-packed comic book interlude!

Along the way you’ll create (and play) games like Wizard Adventure, a text adventure with a whiskey-soaked twist, and Grand Theft Wumpus, the most violent version of Hunt the Wumpus the world has ever seen.

With Land of Lisp, the power of functional programming is yours to wield.

Conrad Barski has an M.D. from the University of Miami, and nearly 20 years of programming experience. This includes a stint developing an obscure Atari Jaguar game, and working on many medical software projects. Barski is also an avid cartoonist, having created the popular alien Lisp mascot and many graphical tutorials. He currently develops cardiology software and lives in Washington, D.C.

Section I: Lisp Is Power
Chapter 1: Getting Started with Lisp
Chapter 2: Our First Lisp Program
Chapter 3: The Syntax of Lisp Code

Epilogue: Land of Lisp: Secrets of the Seven Guilds

"Turns out the border between genius and insanity is a pretty cheery place."
—Paul Graham

"An excellent book for someone who wants to learn how to program."
—Slashdot

"If for no other reason, you should buy Land of Lisp because of the extreme levels of unadulterated nerdery filling its pages. This book will appeal to the long-time Lisper and the neophyte."
—Michael Fogus, author of The Joy of Clojure and Functional JavaScript

"By choosing to teach Common Lisp using 1980s style text games the author has come up with an original and clever idea that avoids all the usual boring examples found in computer language books."
—John Graham-Cumming, author of The Geek Atlas

"To be honest, I just bought the book for enjoyment but I find myself getting a new perspective and learning more about Common Lisp. Recommended!"
—Mark Watson, author of Scripting Intelligence

Check out the Land of Lisp music video!