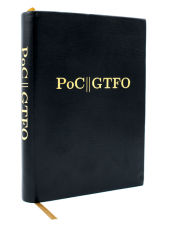 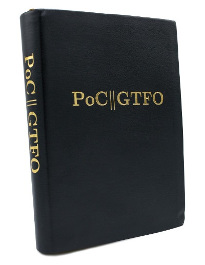 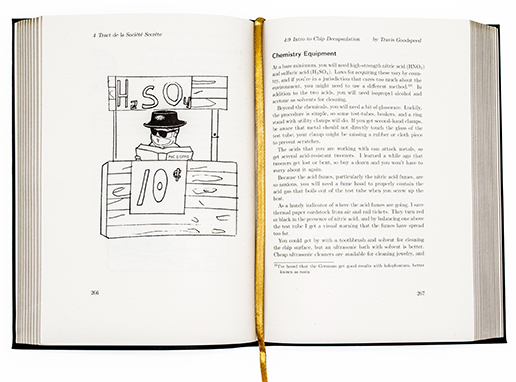 This highly anticipated print collection gathers articles published in the much-loved International Journal of Proof-of-Concept or Get The Fuck Out.

PoC||GTFO (Proof of Concept or Get The Fuck Out) follows in the tradition of Phrack and Uninformed by publishing on the subjects of offensive security research, reverse engineering, and file format internals. Until now, the journal has only been available online or printed and distributed for free at hacker conferences worldwide.

Consistent with the journal's quirky, biblical style, this book comes with all the trimmings: a leatherette cover, ribbon bookmark, bible paper, and gilt-edged pages. The book features more than 80 technical essays from numerous famous hackers, authors of classics like "Reliable Code Execution on a Tamagotchi," "ELFs are Dorky, Elves are Cool," "Burning a Phone," "Forget Not the Humble Timing Attack," and "A Sermon on Hacker Privilege." Twenty-four full-color pages by Ange Albertini illustrate many of the clever tricks described in the text.

Pastor Manul Laphroaig curates PoC||GTFO with a fine gang of friends and neighbors. Many of his essays are featured in the book, including "Epistle to Hats of All Colors," "Sermon on the Divinity of Languages," and "Build Your Own Fucking Birdfeeder."

A CFP with POC

“iPod Antiforensics” by Travis Goodspeed
“ELFs are dorky, Elves are cool” by S. Bratus and J. Bangert
“Epistle to Hats of All Colors” by Manul Laphroaig
“Returning from ELF to Libc” by Rebecca .Bx Shapiro
“GTFO or #FAIL” by FX of Phenoelit

Proceedings of the Society of PoC||GTFO

“Build your own birdfeeder” by Manul Laphroaig
“A PGP Matryoshka Doll” by Myron Aub
“Code Execution on a Tamagotchi” by Natalie Silvanovich
“Shellcode for MSP430” by Travis Goodspeed
“Calling putchar() from ELF” by Rebecca .Bx Shapiro
“POKE of Death for the TRS 80/M100” by Dave Weinstein
“This OS is also a PDF” by Ange Albertini
“A Vulnerability in Reduced Dakarand" by Joernchen
“Juggernauty” by Ben Nagy

Address on the Smashing of Idols to Bits and Bytes

“Greybeard’s Luck” by Manul Laphroaig
“This PDF is JPEG.” by Ange Albertini
“Netwatch for SMM” by Wise and Potter
“Packet-in-Packet Mitigation Bypass” by Travis Goodspeed
“An RDRAND Backdoor in Bochs” by Taylor Hornby
“Kosher Firmware for the Nokia 2720” by Assaf Nativ
“Tetranglix Boot Sector” by Haverinen, Shepherd, and Sethi
“Defusing the Qualcomm Dragon” by Josh Thomas
“Tales of Python’s Encoding” by Frederik Braun
“Angecryption” by Albertini and Aumasson

Address to the Inhabitants of Earth

“A Sermon on Hacker Privilege” by Manul Laphroaig
“ECB: Electronic Coloring Book” by Philippe Teuwen
“An Easter Egg in PCI Express” by Jacob Torrey
“A Flash PDF Polyglot” by Alex Inführ
“This Multiprocessing OS is a Boot Sector” by Shikhin Sethi
“A Breakout Board for Mini-PCIe” by Joe FitzPatrick
“Prototyping a generic x86 backdoor in Bochs” by Matilda
“Your Cisco blade is booting PoC||GTFO” by Mik
“I am my own NOP Sled” by Brainsmoke
“Abusing JSONP with Rosetta Flash” by Michele Spagnuolo
“Sexy collision PoCs” by A. Albertini and M. Eichlseder
“Ancestral Voices” by Ben Nagy

“The Magic Number: 0xAA55” by Morgan Reece
“Coastermelt” by Micah Elizabeth Scott
“The Lysenko Sermon” by Manul Laphroaig
“When Scapy is too high-level” by Eric Davisson
“Abusing file formats” by Ange Albertini
“AES-NI Backdoors” by BSDaemon and Pirata
“Innovations with Linux core files” by Ryan O’Neill
“Bambaata speaks from the past” by Count Bambaata
“Cyber Criminal’s Song” by Ben Nagy

Exploits Sit Lonely on the Shelf

“Witches, Warlocks, and Wassenaar” by Manul Laphroaig
“Compiler Bug Backdoors” by Bauer, Cuoq, and Regehr
“A Protocol for Leibowitz by Goodspeed and Muur
“Jiggling into a New Attack Vector” by Mickey Shkatov
“Hypervisor Exploit, Five Years Old” by DJC and Bittman
“Stegosploit” by Saumil Shah
“On Error Resume Next” by Jeffball
“Unbrick my Part” by Tommy Brixton
“Backdoors up my Sleeve” by JP Aumasson
“Naughty Signals” by Russell Handorf
“Weird Crypto” by Philippe Teuwen