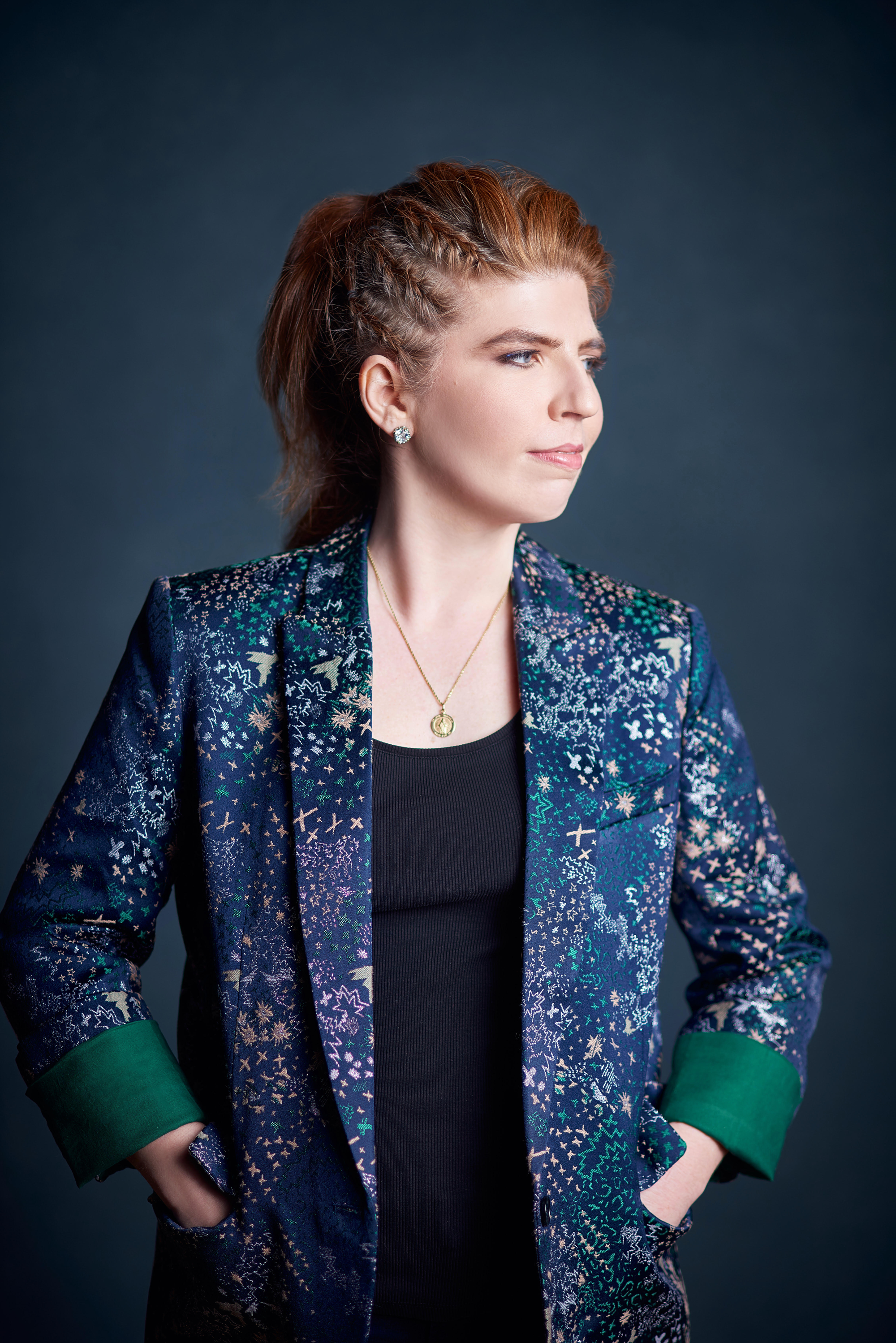 This week, the focus is on software engineer extraordinaire and legacy-systems expert Marianne Bellotti (@bellmar). Her new book, Kill It with Fire (April 2021), reflects her internationally known work on some of the oldest, messiest computer systems in the world, and is rich with historical contexts for advancements in technology, fascinating case studies, flexible modernization frameworks, and her trademark wit. Bellotti currently runs Identity and Access Control at Rebellion Defense; prior to that, she oversaw platform services at Auth0, served on a technical SWAT team in the U.S. Digital Service, and built data infrastructure for the United Nations.

Below, we talk with Marianne about following social science into Big Tech, why a learning disability became her biggest career strength, how diversity affects software output, and the best advice she ever got.

No Starch Press: You took a fairly unconventional path to software engineering. For one, you’re completely self-taught; and, even though you were a fairly prolific hacker in high school, you blew off Silicon Valley to travel, study anthropology, and pursue a career in international development. Eventually, of course, you did get lured into the tech industry, where you’re now pretty much at the top of your field. What led to the pivot?

Marianne Bellotti: I was very interested in social systems. Actually I still am! A lot of Kill It With Fire can be described as organization theory. So I didn’t really change my mind about what I wanted to do, stuff I wanted to do just moved into the tech industry. At the time I went to college, being in technology on the east coast meant working for the banks, or maybe a Fortune 500 company. There was no Facebook. There was no Twitter. Google was just a search engine. Ten years later, the data science movement was getting ramped up and all the interesting activity around social science was shifting towards the way the ubiquity of computers was changing how people organized and interacted.

NSP: Given that it’s often difficult for women to “make it” in tech via traditional means (advanced degrees, networking, etc.), is there something to be said – based on your experience – for going your own way?

MB: The biggest advantage I had making it in tech was actually an experience I had in grade school. When I was eight years old I was diagnosed with a sensory processing disorder, which is a type of learning disability. I struggled in school a lot at first, and then as I found my rhythm I had to deal with the social stigma of having a disability. The attitude of people around me was that I couldn’t possibly compete with “normal” children and if I did better than the “normal” children it was clearly because I cheated. It broke my spirit for a while. I didn’t want to try, because what was the point? It was an awful time, but it came in handy when I entered technology.

Women in technology get treated exactly the same. Many people will assume you can’t possibly be as good as the men, and if you’re in the room it’s because you somehow cheated or because standards have been lowered. By the time I got into technology I had realized that those experiences I had in school were bullshit and I regretted giving up on myself. So when people tried to convince me I couldn’t be successful here because I was a girl, I didn’t internalize it. I just ignored it and kept going.

Some of the best software engineers I know come from non-traditional backgrounds. It’s not about degrees or credentials, it’s about giving yourself a chance. For some people the structure and credibility of a degree will give them the confidence to fight for a place in the room where things are happening. For people like me it was more about having other skills that could be super useful to gatekeepers. But one approach isn’t more effective than the other. You need to be resilient.

NSP: There’s a lot of talk these days about closing tech’s gender gap. After all, women make up less than a quarter of the technology workforce, and even fewer are in government tech roles. Are there solutions for making the field more inclusive, regardless of sector? And, as someone who’s literally written the book on the subject (Hiring Engineers), in what way can recruitment efforts or hiring processes help resolve this?

MB: I really believe that you don’t recruit diverse talent, you grow it. I think more engineering managers need to understand the dynamics of experience level. People assume that you should always hire the most experienced, most talented person you can. If you can fill a team with All Star talent, you should. But when you study how teams actually work, you learn that isn’t a recipe for success. All Star talent needs to own big projects. So if you fill your team with All Stars, they will end up burned out trying to run all the big projects they’ve started by themselves. My rule of thumb is when I need my team to deepen their expertise I fill out junior and mid-career roles. When I need to increase my team’s responsibilities, I hire senior engineers.

When junior roles are not an afterthought, it becomes much easier to plug in diverse recruiting efforts. I watch a lot of teams try to hire all senior, then someone comes through the pipeline who is just below the standard for senior and all of a sudden the team hires them for a more junior role that didn’t exist before. That’s a strategy that’s going to result in homogeneous teams, because the people who we see “great potential” in tend to be people who remind us of ourselves. So an equal candidate from an under-represented group doesn’t get a junior role created for them.

The other thing that kills diversity in recruiting is trying to hire and grow fast. It’s just math. Under-represented groups are going to be rare, if your goal is to hire the first qualified person who makes it through your pipeline, that person is probably going to be a white or asian guy. If you want a more diverse group to choose from you need to factor in some lead time to source candidates. Right now I’m working on finding leads for what I expect to be hiring in late Q3. I do a lot of my own sourcing. I don’t just sit back and wait for recruiting to send me candidates. (For that reason people who are interested in working with me should definitely reach out over Twitter and ask for a 30-minute coffee date! 😉)

NSP: To take this in a more granular direction, and one that speaks to your roots in anthropology, let’s talk about the gender gap in terms of Conway’s Law – the old adage that software mirrors the shape of the company that makes it (e.g., the org chart, team structures, etc.). Is there a parallel with how the lack of diversity in most tech settings is not only a matter of equitable representation but also one of technology’s impact on society being adversely affected by a perpetually male-dominated perspective?

MB: This is a super interesting question! We know from various studies that diverse teams make better decisions not because of different perspectives but because diversity makes people uncomfortable – it puts them on edge – which leads to more critical thinking. At the same time, I think the minority/majority experience does create its own set of assumptions that influence what problems you think need solving. It’s possible. And certainly it’s true that people from marginalized groups will see a different context around proposed approaches, particularly in civic tech.

NSP: You’ve talked about experiencing “imposter syndrome” early in your tech career – that little voice in our heads that says we’re not nearly as competent or talented as the people around us think we are. Struggling with feelings of professional inadequacy can either hold women back from taking on leadership roles in tech, or cause them to avoid/drop out of the field altogether. From an organizational standpoint, what can be done to better support and nurture young women entering the technology industry?

MB: I still experience imposter syndrome all the time. I find that the more of a reputation I develop as an “expert,” the more I enjoy playing the neophyte. It keeps me grounded by putting how difficult it is to learn things on display for others. It seems counterintuitive, but if I hid behind my reputation I feel like my imposter syndrome would get worse. By exploring things I don’t understand and being vocal about not understanding them, I feel much more comfortable with my place in the industry. For example, lately I’ve been learning program language design, and podcasting about my experiences trying to understand that stuff in a series called “Marianne Writes a Programming Language” – twenty-minute episodes of me missing lots of obvious things and needing experts to explain things multiple times just so that I know what to look up via Google later.

In general, I find that women tend not to believe any praise they receive for their technical skills. The best advice I ever got on this was from Mikey Dickerson. He interrupted me while I was in the middle of explaining how I wasn’t qualified for something and just said “you didn’t trick us, we know who we hired.” Pumping people up is the wrong approach. People need to feel seen. When he said this, it gave me a lot of confidence, even though it was a gentle admission of my flaws as a software engineer. And throughout my career, these moments of vulnerability have been the most valuable in fighting back imposter syndrome. When a very senior person confides in you that they don’t understand something, or are afraid to do something, it changes your perspective on your own self-doubt. I try to do the same for others. It’s not about being critical, it’s about breaking down the assumption that smart people are smart without trying.