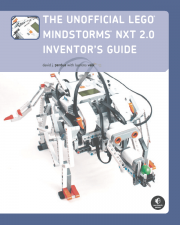 The LEGO® MINDSTORMS® NXT 2.0 set offers hundreds of building elements, programming software, and powerful electronics that you can use to create amazing robots. But where do you begin?

This eagerly awaited second edition of the bestselling Unofficial LEGO MINDSTORMS NXT Inventor's Guide is your key to designing, building, and programming robots with the NXT 2.0 set.

You'll learn practical building techniques, like how to build sturdy structures and use gears, and gain a solid understanding of the set's NXT-G programming language. A series of projects new to this edition offers step-by-step instructions for building and programming six robots, each of which can be built with just one NXT 2.0 set, including:

Additional resources include the Piece Library, which contains basic information on the more than 80 types of LEGO pieces in the NXT 2.0 set, and the Quick Reference, which lists the 34 types of standard programming blocks. So go ahead. Grab your NXT 2.0 set, fire up your imagination, and see what you can invent with The Unofficial LEGO MINDSTORMS NXT 2.0 Inventor's Guide.

David J. Perdue (http://www.davidjperdue.com/) has been inventing robots with MINDSTORMS since 2001. The author of Competitive MINDSTORMS: A Complete Guide to Robotic Sumo Using LEGO MINDSTORMS (Apress, 2004), he has also written for BrickJournal and Computing Unplugged. Perdue is an implementation delivery engineer for EMC, an information infrastructure provider. He lives in St. Paul, Minnesota.

About the Robot Builder:

Laurens Valk is a member of the MINDSTORMS Community Partners, and one of his robots appears on the NXT 2.0 box. Valk is the author of The LEGO MINDSTORMS NXT 2.0 Discovery Book, a co-author of LEGO MINDSTORMS NXT One-Kit Wonders (both No Starch Press), and a contributor to The NXT Step Blog. He lives in the Netherlands where he studies Mechanical Engineering at Delft University of Technology.

"The Unofficial LEGO Mindstorms NXT 2.0 Inventor's Guide is a great companion book to the NXT 2.0 set and helps amateur roboticists learn more about both the NXT-G programming environment and robotics in general."
—TechRepublic (Read More)

The Unofficial LEGO MINDSTORMS NXT 2.0 Inventor's Guide "does a fantastic job of explaining how the NXT 2.0 works. I can recommend it. What I like about the book is that it gives tips on Lego construction as well as advanced NXT-G programming tips."
—JavaSpecialists.eu (Read More)

Check out The Lizard in Action!