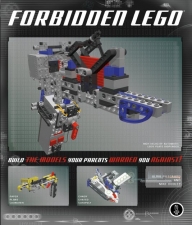 Click here to see a sample building diagram from the Forbidden LEGO!

It just may be impossible to exhaust the creative potential of LEGO® bricks. With an active imagination as your guide, there are endless possibilitiesprovided you follow the LEGO Company's official (and sensible) rules. This means no cutting or tampering with bricks, creating models that shoot unapproved projectiles, or using non-standard parts with any LEGO product. After all, those little precision-molded ABS bricks can be dangerous on the wrong hands!

Well, toss those rules out the window.

Forbidden LEGO introduces you to the type of free-style building that LEGO's master builders do for fun in the back room. Using LEGO bricks in combination with common household materials (from rubber bands and glue to plastic spoons and ping-pong balls) along with some very unorthodox building techniques, you'll learn to create working models that LEGO would never endorse. Try your hand at a toy gun that shoots LEGO plates, a candy catapult, a high voltage LEGO vehicle, a continuous-fire ping-pong ball launcher, and other useless but incredibly fun inventions.

Once you get into the spirit, you'll want to try inventing your own rule-breaking models. Forbidden Lego's authors share tips and tricks that will inspire you and help you turn your visions into reality. Nothing's against the rules in this book!

Ulrik Pilegaard was a Senior Designer and Studio Manager for LEGO MINDSTORMS in Denmark and San Francisco, where he worked on projects for LEGO Technic in collaboration with the Media Lab at MIT and designed multiple models for LEGO MINDSTORMS (including R2D2). After LEGO, Pilegaard held the position of Manager of Design at Evolution Robotics, where he helped develop state-of-the-art robotics solutions. Since 2004, he has worked for Energy Innovations as a senior product designer.

Mike Dooley worked as the Senior Product Manager for the original LEGO MINDSTORMS and was later promoted to Director of Development. Dooley is currently Vice President for Product and Business Development at Evolution Robotics, which focuses on next-generation technologies for consumer robotics.

Click here to view the detailed table of contents

"LEGOs—they're not just for good kids anymore. A book written by two former employees of the Danish plastic-brick giant is burning up the Amazon.com sales charts—and raising eyebrows on the other side of the Atlantic."
—Fox News (Read More)

"A Christmas bestseller, Forbidden LEGO: Build the models your parents warned you against, is a controversial new book that gives children detailed instructions on how to make weapons such as catapults and 'automatic ping-pong ball launchers' purely out of Lego."
—The Daily Mail (Read More)

"A surprise Christmas bestseller, dubbed 'the Anarchist Cookbook of the nursery', is topping the Santa Claus wish list for naughty children and their parents all over the world."
—The Daily Telegraph (Read More)

"My favorite book in the lot is Forbidden LEGO, a collection of playfully irresponsible building projects dreamed up by two former LEGO employees. These are the kinds of toys you imagine designers drafting for fun, but fuddy-duddy safety concerns prevent them from ever coming to market."
—The Holiday Gadget Guide (Read More)

"If you've ever felt like using your LEGOs for more than just building static objects, this is the book for you. Forbidden LEGO is an unauthorized book full of awesome LEGO projects, such as a toy gun that shoots LEGO plates, a candy catapult, and a continuous ping-pong ball launcher. Written by a former LEGO senior designer and former LEGO senior product manager, it's the ultimate how-to for building rogue LEGO creations."
—Uncrate (Read More)

Forbidden LEGO is "finally here, and yes, you want a copy...[The authors] wrote the book to give some kind of a tantalizing hint at the kinds of things that go on behind the scenes at Lego, and the kinds of neat things that might get released in a world without product liability suits."
—Evil Mad Scientist (Read More)

"Remember building cool things with those wonderful plastic blocks? Each one was a marvel of engineering, no doubt. The 'official' Lego manuals forbid projects that fire projectiles or use non-standard parts. But in 'forbidden' Lego, you can build a rocket launcher, or a catapult that shoots M&M's. Fun for all ages!"
—The Public Library of Cincinnati and Hamilton County (Read More)

Forbidden Lego is "A well-illustrated and funny guide to building five projects that actively break a number of Lego rules...check it out for yourself and be sure to have a bunch of Lego bricks hanging around because you'll want to dive right in."
—Ars Geek (Read More)

Check out these YouTube videos of Forbidden LEGO models in action! 1.5 Million Views and counting!