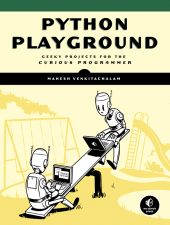 Python is a powerful programming language that’s easy to learn and fun to play with. But once you’ve gotten a handle on the basics, what do you do next?

Python Playground is a collection of imaginative programming projects that will inspire you to use Python to make art and music, build simulations of real-world phenomena, and interact with hardware like the Arduino and Raspberry Pi. You’ll learn to use common Python tools and libraries like numpy, matplotlib, and pygame to do things like:

Programming shouldn’t be a chore. Have some solid, geeky fun with Python Playground.

The projects in this book are compatible with both Python 2 and 3.

Mahesh Venkitachalam is a software engineer with two decades of programming experience. He has nurtured a passion for technology since the eighth grade, which he channels into his popular electronics and programming blog, electronut.in.

"If you want to become adept at doing clever things with Python, I doubt you'll find a better group of projects or more useful help for understanding how the language works."
—IT World

"This is a book that belongs in every Python programmer's library."
—Full Circle Magazine

Read an interview with Mahesh Venkitachalam on InfoQ!

Mahesh Venkitachalam was selected as the Python Developer of the Week on Mouse v. Python! Read the full interview here.

"Python Playground targets programmers that want to further improve their skills and knowledge of the language. The book does a good job at explaining all relevant details and makes sure that readers get a clear pictures of what is going on."
—InfoQ

Page 19: the first sentence should read: "Let’s begin by considering that the equation used to describe a circle with radius r, centered at the origin of a two-dimensional plane, is x² + y² = r².

Page 47: in the 3rd line of the last code block, argumentss should instead read arguments

Page 58: in the 4th sentence of the second paragraph, "step 1" should instead read "step 2"

Page 64: in the 2nd line of the code block, Karplus String should instead read Karplus-Strong

Page 65: in the 3rd full paragraph, -play should instead read --play

Page 67: in the 8th line of the code block, Karplus String should instead read Karplus-Strong

Page 68: in the 2nd code block, -display should instead read --display

Page 69: in the code block, the line that currently reads:
$ python ks.py -play
should instead read:
$ python3 ks.py --play

Page 124: the 1st sentence of the 1st paragraph which currently reads:
"At (1), you perform a sanity check to ensure that the depth map and the image have the same dimensions."
should instead read:
"At (1), you convert the depth map into a single channel image if needed."

and in the 1st sentence of the 2nd paragraph, Image.Load() should instead read Image.load()

Page 128: in the final code block, -tile should instead read --tile

Page 150: the line labeled (1) should be deleted, and the (1) label should be moved to the following line: in vec2 vTexCoord;

Page 168: in the sentence following the first code block, "-1" should not be a subscript